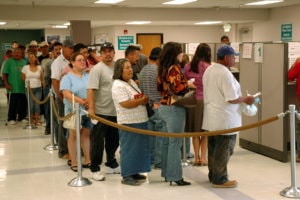 Congressman Brady argues that the bill is “a common sense measure to ensure unemployed workers are ready and available to work.” He also cited a survey by the Society for Human Resource Management which estimates that more than half of all businesses drug test their employees.

Opponents of the bill argue that the implementation of such drug testing is costly to the states and the taxpayers. Infrastructure and bureaucracy must be set up and paid for to actually test the applicants. Additionally, employees pay payroll taxes that are, in turn, used to fund their own unemployment benefits. Thus, states that deny benefits on the basis of a failed drug test would essentially be denying employees the benefits that their taxes are used to fund.

Currently the bill has 10 Republican co-sponsors. However, Democrats are likely to oppose the bill. Thus, until the bill is passed, no new restrictions as a result of the bill will be placed on benefits. Furthermore, the bill would not make it mandatory that the states test unemployment applicants, but would allow each state to do so individually. Thus, if passed, each state would need to take further action to implement the testing standards. For these reasons, the law is not likely to impact unemployment applicants anytime soon. If the law is implemented in the next few years, a number of states would likely follow suit and implement a testing scheme.