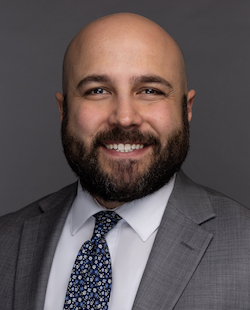 The educational background of Mr. Pometto includes a law degree from Duquesne University School of Law and an undergraduate degree from the University of Pittsburgh. While at Duquesne Law Attorney Pometto's trial skills were identified by the faculty as he was chosen to represent the school at multiple, national trial advocacy competitions.

Before pursuing an education and career in law, Attorney Pometto served in the U.S. Air Force for four years, both stateside and overseas. While in the Air Force, Attorney Pometto was a fighter jet mechanic and also served as security forces when force augmentation was required by the base commander. He uses the discipline and work ethic he learned in the military to bolster his legal practice.

Awards & Accreditations
Contact Us
Practice Areas
Client Reviews
★★★★★
"Joe is an excellent attorney. He does a fantastic job at laying out all the options in front of you and makes sure you understand what each one entails. He was also available and willing to speak with me at all times." Anonymous
★★★★★
"We were very satisfied with the legal representation Joe provided us in our defense. He was very professional and knowledgeable and did an excellent job getting the best outcome we could expect. We highly recommend Joe for handling any of your legal matters. You won’t be disappointed." Mike
★★★★★
"Joe is a great attorney, We couldn't have asked for a better person to handle our son's case. We had questions and he would get right back to us. Couldn't ask for a more kind hearted, caring, compassionate, honest and dedicated attorney. This was a very diffficult time for us and Joe made us feel at ease, because he really knew his job. I want to send a very special thank you for all you did." Tammi
★★★★★
"A friend recommended to mr Pometto and i couldn’t be happier. Joe consulted with me over the phone and gave me a few option pertaining to my case and i decided to hire him. He presented my options and explained my charges in a easy and very clear way to help me decide what was best for me. I would recommend mr Pometto to anyone for their legal needs and i would gladly hire him again let’s just hope i don’t need him." Dominic
★★★★★
"On June 26, 2017, Attorney Pometto handled a case for us defending our son. He was professional, attentive, understood our goal and put into place his plan to make that goal happen. He provided immediate responses to our calls and concerns and truly left us feeling that we were in good hands. The outcome of the hearing was exactly what he said it would be and we could not have been happier. We fully endorse this attorney and believe him to be a talented, knowledgable professional who will give his best." Marsha
View More
Submit a Law Firm Client Review